Last week we said goodbye to Lord Dormir. This guy:

I first met Lord Dormir in 2004 when I was a volunteer at our local humane society. His name at that time was Sugar, because his first family thought he was a girl.* He weighed almost 14 pounds. He was friendly, beautiful, fully declawed, already neutered and one of the sweetest cats I have ever met. I loved him instantly. He loved people of all ages, cats, AND dogs. 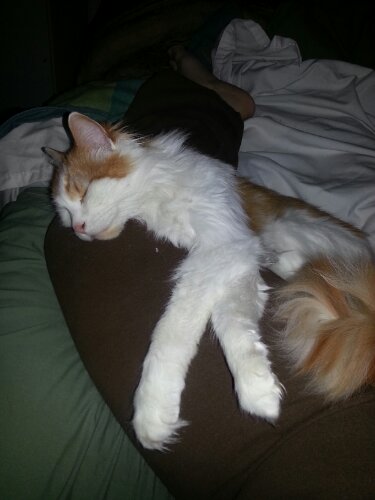 He used to sleep in the dog beds, and though our dogs are ten times his size they never pushed him out. One day I went to put Selby in her kennel and found Lord Dormir curled up in there having a nap.

He had a bad case of feline OCD. He would groom anyone and anything -cats, dogs, people, furniture… but sweaters were his favorite. He could not resist licking a sweater, no matter how many times his tongue got stuck to it like that kid Flick in A Christmas Story.* (Which was EVERY TIME) He groomed himself and our other cat so well that he had a serious hairball problem. I’m sure he just considered this a necessary sacrifice in the name of beauty. 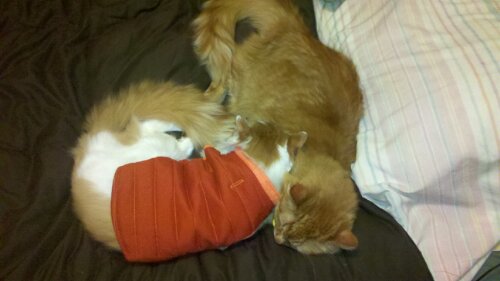 He really did not know how to take no for an answer; it was his firm belief that everyone in the world wanted to cuddle with him just as much as he wanted to cuddle with them. He could hear a butt land on the couch from anywhere in the house, and would instantly materialize to sit in that person’s lap. And then he would slowly make his way up from the lap onto the chest.

“What? This is my rightful place.”

He liked to curl up on my shoulder when I was laying in bed reading or playing games on my phone (which was often). Or, sometimes, right on my face: 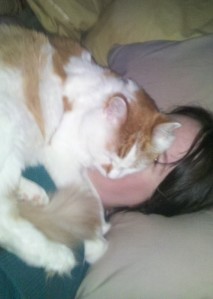 This picture was not staged; this was Lord Dormir’s favorite sleeping position.

My friend Eric once described him as “the purringest kitty ever”. This was an extremely accurate description. If he was awake and a human was around, Lord Dormir was purring. He even purred while eating. 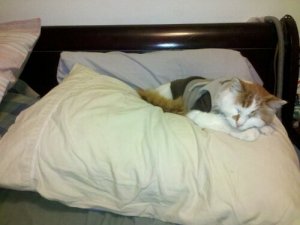 He liked to sneak out of the house and chase butterflies in the yard. He did NOT like to go outside on a leash & harness.

He liked to steal the dog’s food when they weren’t looking. Sometimes he would even steal it out from under their noses while they were still eating it. He also liked to sneak up in the counter and lick our dishes clean. Recently he even got so bold that he tried to eat our food right off our plates while we were still eating.

He wasn’t perfect, but he was perfectly ours. I miss him.

* In fact, nearly everyone who met him for the first time said “What a beautiful cat! What’s her name?” But it made no difference to him whether you thought he was a boy, a girl, or a genderless alien. His mission in life was to love and be loved by everyone.

** Don’t tell me you don’t know what I’m talking about?

Mama says you can click here for our RSS feed. We don’t really know what that is, but anything with the word FEED in it must be a good thing.

View stories by category (hey that sort of rhymes!)

Our most recent posts

Want to find a story but can’t remember what it was called, except that it might have had something to do with “water” or maybe it was “blanket” or something? Use this box to search: